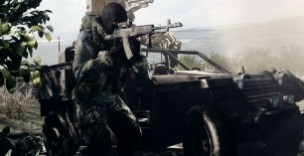 Now that they’re out and you’ve had time to play them we wanted to know which of the season’s big shooters is your favourite and why. How do the single-player, co-op, and multiplayer options stack up in each game and which is most important to you? What have you been most impressed with in each sequel and what don’t you like?

For such a contentious subject the responses we got in were remarkably reserved and well considered, with most people agreeing that Modern Warfare 3 had the best single-player and co-op. Opinion was more split on multiplayer, although Battlefield 3 just edged it, compared to the more familiar thrills of its rival.

I always enjoy the campaign in Call Of Duty games and Veteran took me seven hours to complete (I’m getting old and reflexes are fading). So in short: best campaign: Modern Warfare 3, best multiplayer: Battlefield 3! It’s much better to swoop in on a chopper and drop off your mates than call in an airstrike off the back of a Killstreak. The only bad thing about Battlefield 3 online is the dodgy party system, and in that department Modern Warfare 3 has better matchmaking…

It just has to be Battlefield 3, Modern Warfare 3 has virtually nothing new. I’ll not be buying a Call Of Duty game until they produce something worth playing. I can’t believe the mindless sheep buying the same game every single year. They’re all as near dammit identical.

There are so many I’ve asked that won’t even try Battlefield, but the vast scale of the maps, array of different weaponry and classes, vehicles and scenery destruction and different ways to play will keep me entertained till the next one, hopefully in about four years’ time!

Try it guys, you may like it, but play with Battlefield mates if possible, no instructions or tutorial mean it’s frustrating to newbs, and they may not be aware of ammo/health packs, spotting, etc.

Haven’t tried the multiplayer yet as I wasn’t a fan of it on either of the previous games but I love the campaign. It is everything I was wanting, especially from Battlefield 3… but now all I need to do is complete the Modern Warfare 3 campaign and complete the trilogy story so I can trade it in for Skyrim. That and Battlefield 3 multiplayer will last me for the next few months.

All about the multiplayer

I found Modern Warfare’s single-player and co-op campaigns superior to Battlefield 3’s without being particularly enjoyable, as I’m less fond of linear shooters. As a result it becomes about the multiplayer.

I’m not terribly good at online shooters, and so I much prefer the vehicle and team-based approach in Battlefield 3, which offers more tactical variety and still allows me to contribute to the squad even when I have a rubbish kill/death ratio. To be honest I wish they would ditch the kill/death stat altogether!

I would give this year’s crown to Battlefield 3, but to be honest it’s a battle of the overfamiliar and the deeply flawed. Modern Warfare 3 may well be the best one yet, I’m not saying it’s a bad game, but I personally have seen it all too many times before. I liked the campaign mode but once that was done my interest really started to dip.

Battlefield 3’s single-player was terrible and the co-op wasn’t much better but for me the multiplayer was a big step forward. Love the use of vehicles, but the maps do seem too big for the number of people in them. I guess this is proof that the PC version is the one to really get.

But let’s face it neither game is really pushing the genre forward is it? Maybe it needs a new challenger to really shake things up.

I’ve played both Battlefield 3 and Modern Warfare 3 and for me Battlefield 3 comes out on top. Modern Warfare 3 is a very competent product and the campaign is very epic in scope and dynamic. Probably the best in the series for me, even though still unforgivably lacking campaign co-op. The multiplayer isn’t for me though and I feel the series hasn’t evolved one jot in years.

It’s quite literally the same game every year, which I think is the root of the current discontent with the game. Also the whole formula is feeling a bit dated now and dare I say soulless. I love the campaign in Battlefield 3, with the jet sequence far better than any of the C-130 Gunship sections in Modern Warfare.

I prefer the way it plays, movement feels more natural and realistic. The campaign’s not as long as was made out though, it has to be said. Co-op is great, but again should’ve been in the campaign also, but what can I say about the multiplayer? Awesome as ever. I just feel the game has a lot more soul than the other game. All in all I like both games this year a lot. They both have some good features, but also lacking key features too.

I’ve played both games and I’ve sold them both too. I don’t know why I got them in the first place to be honest because I knew what they’d be like and I wasn’t surprised. Modern Warfare 3’s story mode was good but I’d never want to play it again. Ditto any of the co-op missions once I’d played them once or twice. The multiplayer: I was bored after about my second match. Yes, they have changed some things but nothing that mattered to me.

As for Battlefield 3, the story mode was just embarrassing in the way it wanted to be Call Of Duty. Where was the pride of the series if it wasn’t to be the king of the hill but thinks the only way of doing that is by being exactly the same as the current monarch?

Co-op was a waste and multiplayer… well, it certainly kept me more interested than Modern Warfare 3’s but it’s not exactly a big change in itself is it? Anyone that’s played previous Battlefield games will find very little new here and that’s why I got rid of it. When a military shooter learns a new trick let me know, because neither of these do anything different.

I have both games on Xbox and have to say as package I’d say Modern Warfare 3 is better as it offers a better single-player and co-op experience, of which I was slightly disappointed with Battlefield 3, and has a fun multiplayer.

As a game though I think Battlefield 3 is better. With Modern Warfare 3 you sometimes feel on multiplayer that it’s still a single-player game people are so worried about their kill/death ratio that sometimes you’re forced to think and look after yourself. People don’t seem to want to communicate either. All I like to look for is someone to tell me whether they have spotted an enemy or if they have left an area we have been holding up. In that way I’ll stop having so many deaths from being shot in back as I thought one of my team was watching that area. It’s also frustrating when you shoot a target and someone comes along and takes the kill to take all the points and you get rewarded near to nothing for suppressing and hitting the target.

Battlefield 3 though is completely different in multiplayer, you can spot targets using the Back button, and get awarded points for your teamwork involvement as well as kills. I played a game of Conquest and on a run before dying we had our team set out in a convoy of tanks and jeeps with someone in helicopter providing air support and troops on foot being mechanics or medics. We took the first marker together then split into two for the others. If we came under attack we decided that one person would repair the tank, either gunner on tank or troops on foot, while one would heal that person if the tank was taking hits.

When I eventually died others needed some ammo so I changed class and my role in the team then changed. Everyone had their role to play, everyone got rewarded for their role and we were unstoppable. You just don’t get that same experience with Modern Warfare 3 and it’s a good enough experience that makes the other modes a distraction as every multiplayer game might have similar objectives but the outcome of the game is never the same and is dependent on the role you take up for your team.

To answer the question of which is best I can’t, they both are enjoyable, offer something different and have their flaws but I do know you would be silly to choose one over the other when you can just enjoy both.

The things I hope to change with Call OfDuty is set it a bit more in the future, which enables more inventive weapons in a Perfect Dark sort of way, as it feels like we have been playing with the same weapons but just starting at square one again and again.

Also incorporate a points system for the team, not just the individual, maybe have a Team Streak system where if your team get so many kills without someone dying you get rewards. With Battlefield can we have some new game modes to choose from now, better textures on the weapons and please, please more than 24 players. As GC said it just doesn’t utilise the maps the way it should do, I’d be happy to never have a single-player with Battlefield if it meant more players for multiplayer.

For both games please give people who don’t have all the time in the world to play a different way to get weapons and upgrades. I’m sure the points I earn in a game could be then put into credits for me to purchase the weapons and upgrades that I actually want.